Whale Watching Charter For 4 In Ketchikan 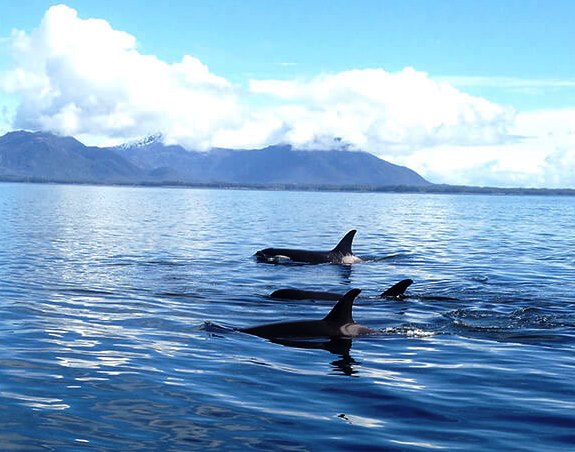 In the waters that line Alaska’s coast, an encounter with a whale is likely, if not predictable. From the remote northernmost to the lush southeast and even near downtown Anchorage – the state’s whale watching opportunities are the crowning jewel of many Alaskan vacations. And in the summer, after thousands of whales have made their way to the rich feeding grounds of Alaska waters, sightings are as plentiful as the sun. This is a must see.

What you can expect to see onboard our charter boat. Whale enthusiasts are likely to see orcas, also called killer whales. The striking black-and-white beasts are dolphins but are called killer whales because they attack and feed on other whales, including belugas, as well as seals and sea lions. Orcas spend winters in the north and migrate south to take advantage of other animals that visit the waters of Alaska each summer.

Another whale sometimes sighted by visitors is the gray whale. Gray whales like shallow water and are the only whales that are primarily bottom feeders. Grays begin arriving in Alaska in April and migrate through the Gulf of Alaska to feeding grounds in the Bering, Chukchi, and Beaufort seas. They like to stick close to the shore, which provides ample viewing opportunities as they skirt the Peninsulas.

While sightings aren’t as frequent as those of other whales, bowhead, minke, fin, narwhal, and sperm whales might also be seen in Alaskan waters. For the most dedicated whale watcher, the rarely seen blue whale makes a pilgrimage each year north through the Gulf of Alaska. Blues are the world’s largest mammal, spanning up to 100 feet and weighing up to 200 tons.

Whether they are leaping from the water, slapping their tails on the surface of the sea, or staring you in the eye, the sight of a 50-foot humpback playing around in front of a glacier will never be forgotten. All you need is a pair of binoculars, rain gear, warm clothes, a camera, and attentiveness. In Alaska, you never know when you’ll be sprayed by the wake of a tail slap by a whale.

At Anglers Adventures and Outfitters, every day is an adventure. Every moment out on the water is a chance to witness something miraculous. Located in beautiful Southeast Alaska, our charter is in the prime location for bearing witness to some beautiful whales. If you’re interested in more information on whale watching charters, you’re in the right place! Call us today to reserve your spot on the next whale watching adventure!